Sandton, JOHANNESBURG: It was a night of honour and glamour when the South African tourism industry celebrated its top business owners and service providers at the fourth annual Lilizela Tourism Awards on 16 October 2016.

This prestigious award, which recognises tourism innovators and pioneers, went to renowned Mpumalanga artist, Esther Mahlangu. A previous Lilizela category winner in the Roots and Culture category, Mahlangu’s colourful Ndebele designs have been exhibited around the world and have graced global brands such as BMW, British Airways, Fiat and Belvedere luxury vodka, placing South African traditional art and design on the international map.

The 80-year-old Mahlangu joined 53 other national winners of the Lilizela Tourism Awards, who travellers had voted the best of the best in categories ranging from service excellence and entrepreneurship to sustainable development.

“We salute Mam’ Esther who is truly a national treasure and an outstanding ambassador for South Africa’s rich cultural offerings,” said Minister Hanekom.

“The Lilizela Tourism Awards give us the opportunity to celebrate trailblazers such as Mam’ Esther, as well as service excellence in the South African tourism industry in general. Tonight is an opportunity to pause and thank these individuals and businesses for their contribution to putting South Africa firmly on the global stage by ensuring their product and service offerings are of the highest standard,” said Minister Hanekom.

“With 5.8 million people having come to South Africa between January and July this year, the number of tourists is on the rise. By being service–oriented, the businesses celebrated today help to ensure that this growth path continues, guaranteeing memorable experiences for all tourists,” he added.

The 2016 Lilizela Tourism Awards, an initiative of the National Department of Tourism and spearheaded by South African Tourism, was a star-studded celebratory affair hosted by media personalities Bonang Matheba and Jason Greer. The electrifying entertainment for the night was provided by Mi Casa, the Mzansi Youth Choir and the Johannesburg Youth Orchestra. The occasion gave players and stakeholders in the country’s tourism industry the opportunity to come together to toast to excellence and be inspired by the example of others.

The awards were established in 2013 to recognise and reward exemplary service among businesses in the local tourism sector, ranging from accommodation establishments and tour operators to scenic attractions and cultural heritage sites.

In 2016, the awards attracted a record number of 1122 entries, up 18% from last year’s total. Tourism businesses across the nine provinces were encouraged to enter, with a great call that they be graded with the Tourism Grading Council of South Africa, a unit of South African Tourism.

Members of the public were then invited to have their say on the Lilizela Tourism Awards website by voting. These votes together with those from various platforms such as TripAdvisor and TGCSA’s Tourism Analytics Programme, formed 80% of the score for each entry. A panel of high-level judges for each category, drawn from the industry and academia, contributed the remaining 20% of each establishment’s score.

From these calculations, 589 finalists were selected nationwide, and each province held its own awards ceremony in the run-up to the national finals. During these provincial award ceremonies, 262 provincial winners were celebrated.

This provincial shortlist was further narrowed down to 53 national winners, who were honoured with trophies on Sunday night. Of the national Lilizela winners, most are from the Western Cape (17), followed by the Eastern Cape with 10.

According to Oupa Mbokodo, Director at Grant Thornton, “The awards processes from all provinces appeared to be in compliance with the rules, and terms and conditions of the Lilizela Tourism Awards. No major issues were noted, therefore based upon the work performed and the results obtained, we can conclude that the 2016 Lilizela Awards judging process was fair and transparent.”

Awards are made in a number of categories including the Service Excellence Award (with sub-categories Accommodation, Visitor Experience, Tourist Guides and Tour Operators); Entrepreneurship (for emerging tourism businesses); Sustainability and Good Governance; and the prestigious Minister’s Award, awarded at the minister’s discretion.

Entry to the Lilizela Tourism Awards is free and tourism businesses of all sizes are encouraged to enter in a bid to help develop, grow and transform the industry. For more information, visit www.lilizela.co.za.

Register on our media extranet to browse the latest news releases (from SAT as well as the tourism industry in general), access the news archive and get details of all upcoming tourism industry events (both locally and internationally).
http://www.southafrica.net/media

South African Tourism is the national tourism agency responsible for the marketing of South Africa as a preferred tourist destination. It is headed up by Chief Executive Officer Mr Sisa Ntshona 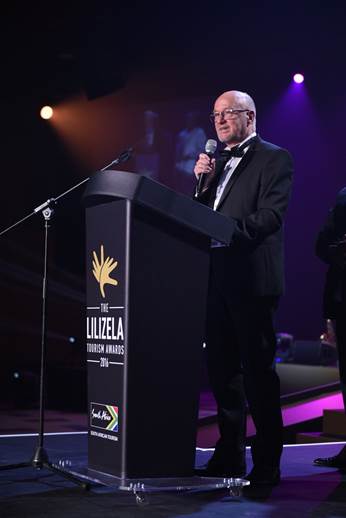